What does it mean to be torque dense?

Ogura offers two types of high torque clutches for industrial applications. Sometimes the priority is to provide as much torque in the smallest package possible. Both provide high torque in an extremely small diameter. Tooth clutches are slightly better at providing the highest torque in the smallest diameter possible but can only be engaged at relatively low rpm (under 50). Multiple disc clutches can be both engaged and disengaged at much higher speeds. Separate drive cup allows for easy connection to a gear or pulley. Electromagnetic multiple disc and tooth clutches can operate either dry or in a gearbox with oil. Multiple disc clutches for use in oil include a unique pattern on a friction disc to provide fast engagement. Separator springs between friction plates provide quick release time.

Multiple disc clutches and brakes of the MD and MW series are rated up to 12,000Nm / 8,851 lb ft static torque. Soft engagement is possible by varying the clutch control current since the current to torque curve is somewhat linear. These clutches and brakes are often used on gearboxes, machine tools, construction equipment, packaging equipment, cranes, and automation equipment.

Tooth clutches of the MZ series are rated up to 4,000 Nm / 2,950 lb ft static torque. Clutches can also be used as brakes by locking the output in a rigid frame. Tooth clutches do not slip. They are designed for minimal backlash. Tooth clutches can also be designed to allow them to only engage in one position. This is important on machines like printing presses that must have each section timed with the other. These clutches are often used on medical equipment, robotics, aerospace, security gates and doors, wind turbines and paper mills. 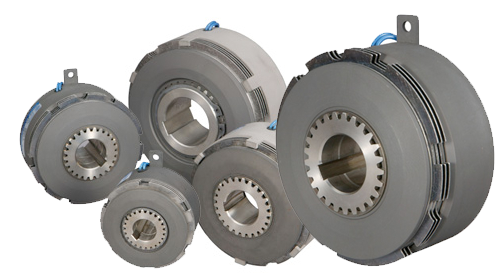 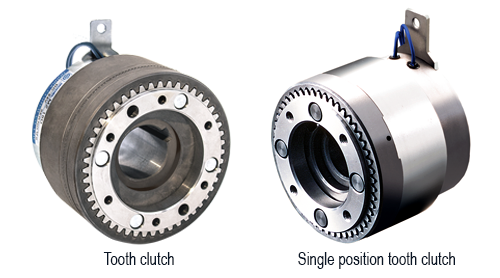